What every adult age 50 and older needs to know about shingles (and chickenpox, too) As you get older, your risk of shingles increases — and so does the risk of complications. Here are the facts about this viral infection, from prevention to treatment.

There’s a lot to celebrate when you turn 50. An increased risk of shingles isn’t exactly one of them. But 1 in 3 people in the U.S. get this viral infection at some point, and most are older adults, according to the Centers for Disease Control and Prevention. Here are 5 need-to-know facts about this viral infection and its predecessor, chickenpox.

1. Shingles and chickenpox come from the same virus

“Chickenpox and shingles are both caused by the varicella-zoster virus. They are actually part of the herpes virus family,” says Alexea Gaffney, MD. She’s an internist and infectious disease specialist at Stony Brook Medicine in Stony Brook, New York.

But you can’t get shingles without having chickenpox first. Say you never had chickenpox as a kid and haven’t been vaccinated against it. If you come in close contact with someone who has chickenpox or shingles, you can become infected with the varicella-zoster virus, Dr. Gaffney says.

Between 10 and 21 days later, the itchy chickenpox rash appears all over your body. You’re contagious until the lesions have all scabbed over. That can take about a week. You may also have fever, headache, fatigue and loss of appetite.

So where does shingles come in? While your chickenpox symptoms eventually go away, the varicella-zoster virus doesn’t. It makes a forever home in your nerves.

“The virus hangs out, usually for many years. Your immune system is in place to keep it in check,” explains Kevin Winthrop, MD. He’s a professor of infectious diseases at the Oregon Health and Science University School of Medicine in Portland, Oregon. “When it starts to reactivate, your immune system hustles and silences it. But every once in a while, it breaks through and causes shingles.”

As with chickenpox, shingles shows up as a rash. “The rash appears on the right or left side of the body and typically doesn’t cross the midline,” says Dr. Gaffney. The rash usually has a red base. On top of that, you may have tiny fluid-filled blisters called vesicles. You might also experience other symptoms, such as fever, tingling and burning, she says. One of the big differences between chickenpox and shingles is the level of pain. The shingles rash can hurt — a lot.

As with chickenpox, you’re contagious until the blisters crust over in about 10 days. They usually clear up completely in 2 to 4 weeks. 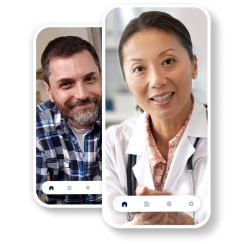 Need to see a doctor?

We have you covered — schedule a virtual visit today. No insurance required.

2. Certain factors make you more likely to get shingles

What causes the virus to reactivate as shingles in some people and not others? As you get older, your cells’ memory of the virus begins to fade, says Dr. Winthrop. If your body doesn’t recognize it as well as before, it’s harder to prevent the virus from waking up. That’s partly why people over 50 are more likely to get shingles.

“People in immunocompromised states are also more likely to get shingles,” explains Dr. Gaffney. “That could be as simple as having diabetes or as big as having a history of cancer or some sort of transplant.”

Other conditions, such as HIV, and certain medications, such as steroids, can also increase your odds of getting shingles, according to the CDC.

3. The sooner you get treatment, the better

Shingles is treated with prescription antiviral medications, such as valacyclovir, acyclovir, or famciclovir, according to the CDC. (You can get medications, including these, delivered right to your door. Learn how.)

“Treatments really work best if you start them as soon as possible, ideally within the first 48 hours,” says Dr. Winthrop. Antiviral medications can help shorten the length of your illness and reduce the risk of more serious complications, he says.

You typically need to take the medication for 1 to 2 weeks. People who are immunocompromised may need a longer course of treatment, says Dr. Gaffney.

If you’re dealing with a first-time chickenpox infection, your doctor will also likely prescribe an antiviral medication. Again, the sooner the better. The medication works best when you take it within the first day of symptoms, according to the CDC.

4. Some people may develop serious complications

While most people have a typical course of shingles, about 15% to 20% have a more severe illness, says Dr. Winthrop.

The most common complication of shingles is chronic pain that persists long after your shingles has cleared up. It can last from months to years, he says. The risk of this complication, called postherpetic neuralgia, rises with age. About 10% to 13% of people over 60 experience it, according to the CDC.

Other complications are even rarer. They can depend on where the rash appears, says Dr. Gaffney. For example, a shingles rash that occurs on the head or face may lead to Bell’s palsy (drooping on 1 side of the face), hearing or vision problems, dizziness or inflammation of the brain.

Those who are immunocompromised are also more likely to experience shingles complications. And remember: Getting early treatment with antivirals can reduce the length and severity of your shingles and lower the risk of complications.

5. Vaccines can prevent chickenpox and shingles

The chickenpox vaccine was made available in the mid-1990s, so most people who have had neither chickenpox nor the vaccine are older. If you’ve never had either, you can get the 2-dose vaccine at any age, according to the CDC.

But what if you don’t remember whether you had chickenpox as a kid? There’s a test for that, says Dr. Gaffney. “You can ask for an antibody test to find out if you are immune to chickenpox,” she says. If you’re not, then you can get the vaccine to protect yourself.

Beyond that, the 2-dose Shingrix® vaccine is recommended for people age 50 and older. According to the CDC, that is true even if you got the older shingles vaccine (Zostavax®), which is no longer available in the United States. It's also recommended even if you have received the chickenpox vaccine. Shingrix is more than 90% effective at preventing shingles.

“The most important thing people over 50 should know about shingles is that they should just go get vaccinated if they haven’t been already,” says Dr. Winthrop. “The risk of serious shingles complications is high enough that it’s really worth it to vaccinate.” And if you don’t have time for an extra doctor’s appointment, swing by your local pharmacy for your shots instead.

Optum Store provides total care for your body and mind. Refill a prescription, schedule a virtual visit, or shop for health essentials all from the comfort of home. Explore now.